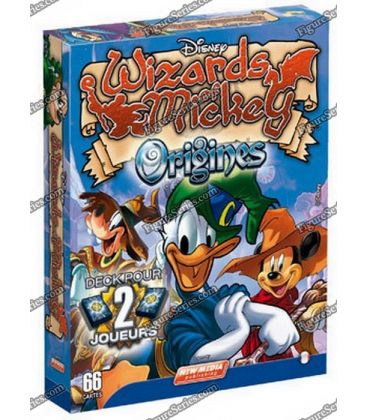 Deck of 66 disney brand cards, wizards of MICKEY les ORIGINES series, French version. The box contains 2 decks of cards to play with 2, the Black Phantom deck of 33 cards and the Wizards of Mickey deck of 33 cards + 12 Diamagic tokens + 1 game mat + 1 booklet of the rules of the game. Observed shop price: 17€99.

Explore the magical world of Wizards of Mickey. Fearsome dragons, powerful magicians, deceitful witches, mysterious castles, and super-powered spells await you in the Starter Decks of the Origins series.

Illustrations by the best disney artists, a saga published by Disney Hachette Presse and rules that are easy to learn and have a real strategic depth... All this you will find in the Starter Decks of the Origins.

The Starter Decks contain everything you need for 2 players to start playing, with a Wizards of Mickey deck and a Black Phantom deck.

30 other products in the same category:

To be determined Shipping
0,00 € Total